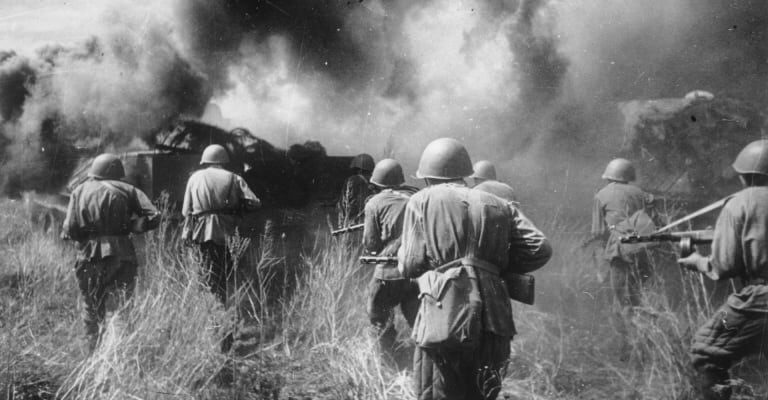 Home » World War II: The Beginning and the End

World War II: The Beginning and the End

When Did World War II Begin?

In Europe, World War II began on September 1, 1939, with the German invasion of Poland. In response, the United Kingdom and France declared war on Germany on September 3, 1939. On June 22, 1941, the war between the Soviet Union and Nazi Germany began with Operation Barbarossa, the codename for the German invasion of the Soviet Union. In the Pacific, the war began on December 7/8 with the Japanese attack on the American naval base at Pearl Harbor and other American, British and Dutch military bases throughout Asia.

Who Were the Leaders of the Second World War?

The Outbreak of War

Adolf Hitler was determined to seize and attack Poland in early 1939, even though Poland had French and British military support in the case of a German attack. Before invading, Hitler had to offset the possibility of the Soviet Union resisting the invasion of its western neighbor. Secret negotiations took place on August 23-24, leading to the signing of the Soviet-German Nonaggression pact in Moscow. It was agreed by a secretive protocol, that Poland would be divided between Germany and the U.S.S.R, Germany received the western third of the country whilst the eastern two- thirds were going to be taken over by the Soviets.

Hitler believed that his plan to invade Poland could go ahead without the Soviets or Britain’s intervening and he ordered the German invasion of Poland on the August 26. The news spread quickly, causing Hitler to postpone the invasion to start in a few days. On August 31 at 12:40 pm Adolf Hitler ordered the invasion against Poland to begin at 4:45 am the following morning. As ordered, the invasion of Poland began and in response, war was declared on Germany by France and Great Britain on September 3 at 11:00 am and at 17:00 pm, World War II had begun.

The End of the War

On May 8, 1945, the war in Europe had come to an end. As the news of Germany’s surrender reached the rest of the world, many cheerful crowds gathered to celebrate the great news, with newspapers declaring the victory in Europe grasped in their hands. Later in the year, U.S. President Harry S. Truman announced the surrender of Japan and the end of the Second World War. The official surrender documents were signed on September 2, 1945, aboard the USS Missouri, marking that day as the official Victory over Japan Day (V-J Day). It was wonderful news for the world that the war had ended but devastating for some knowing that loved ones would not be returning home. Over 400,000 Americans gave their lives saving and protecting their country. The Germans surrendered to the Allies on May 7, 1945, in Reims, France and surrendered again on the 9th in Berlin.