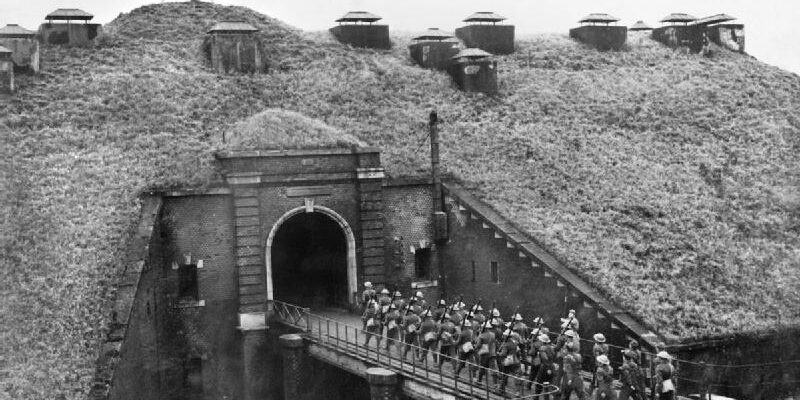 Home » The Maginot Line: The Symbol of Failed Strategy

The Maginot Line: The Symbol of Failed Strategy

The Maginot Line, named after the French Minister of War André Maginot, is a line of concrete defenses built by France in the 1930’s. Built along the French border with Germany, the line was designed to deter foreign military invasions. Costing more than $9 billion, the 280-mile-long line consisted of numerous fortresses, minefields, underground bunkers and gun batteries. The Maginot Line was constructed with reinforced concrete and 55 million tons of steel deeply rooted into the ground. It was designed to uphold against heavy artillery fire and other forms of German attacks.

In his book, The Maginot Line 1928–45, published in 2003, William Allcorn wrote that “The Maginot Line was a technological marvel, far and away the most sophisticated and complex set of fortifications built up to that time.”

However, after World War II broke out, the defensive border that was supposed to serve as France’s salvation instead became a symbol of failure. Instead of focusing on how to defend against new threats of high-speed armored fighting vehicles, French leaders based their strategy upon countering the tactics and technology of previous wars. Upon reaching the line, German forces simply went around it, driving their fast-moving tanks through an area of wilderness in bordering Belgium that was incorrectly assumed by the French as being impenetrable.

The decision to construct the Maginot Line was partly due to the many years of German invasions along the France-Germany border, where France had barely any natural barriers. Following the heavy cost of World War I which ended with over 1.4 million French army casualties, military leaders started to deliberate the best way to counter future attacks from Germany, as they believed war in the near future was inevitable.

Marshal Joseph Joffre, a war hero from the Battle of Marne in 1914, argued that the optimal approach to protect the French border while allowing the French army room to maneuver and launch an attack, was to build a few heavy fortifications. Contrastingly, Marshal Henri-Philippe Petain, who had led France to victory at Verdun in 1916, believed that a continuous line of lighter fortifications who be more effective.

The designers of the Maginot Line ultimately decided to combine the two ideas together, and devised a plan for a single continuous line, which consisted of large and imposing fortresses which were placed in between other fortifications.

French engineers closely studied the circle of forts surrounding Verdun, which had been barraged by artillery during the battle in 1916. Despite the expectation of military leaders at the time that the forts would fail, the engineers discovered that the walls withstood well, and the gun turrets had been effective. The engineers developed plans for concrete and steel fortifications with a lot of firepower, and vast underground passages.

One of the main advocates for a reinforced border was Andre Maginot, a French politician who was severely injured in World War I, rendering him unable to walk without crutches. In his two stints of Minister of War during the 1920’s, Maginot successfully convinced the French parliament to assign funding for the project. In acknowledgement of his role, journalists began calling it the Maginot Line.

As well as the probability of future war, Maginot had another convincing argument on his side. The heavy losses suffered by France during WWI meant that there would be a future shortage of soldiers to defend the country against Germany. Therefore, heavy fortifications seemed like a great method to provide France with protection until manpower returned to normal.

Construction of the Maginot Line began in the late 1920’s and was mostly complete by 1936. In August 1939, French officials gave future British Prime Minister, Winston Churchill, a tour of the Maginot Line and he was very impressed. According to Paul Addison’s biography of Winston Churchill written in 2007, in response to his tour of the line, Churchill wrote that “the French front cannot be surprised. It cannot be broken at any point, except by an effort which would be enormously costly in life and take so much time that the general situation would be transformed while it was in progress.”

However, despite all its reinforced concrete and tons of steel, the Maginot Line had at least one significant flaw. While the border with Germany was defended, the fortifications ended at the beginning of the border with Belgium, which was a French ally in the 1930’s. Following Belgium’s declaration of neutrality in 1936, French defense minister, Edouard Daladier pursued further funding to extend the Maginot line along the France-Belgium border, but those fortifications were never completed.

With the Maginot Line preventing the Germans from directly entering the French-German border, the French knew that in order to attack, the Germans would have to go through Belgium which had a natural barrier, the Ardennes Forest. The French assumed the dense forested area would be impenetrable for the Germans, but they were proved wrong.

Lt. Gen. Heinz Guderian, Germany’s top tank commander, was familiar with the Ardennes Forest from his service during World War I and was able to formulate a plan to navigate through the terrain into France. The plan encouraged the German army to take the risk and they advanced through the wilderness successfully. In an interview in 2020, French historian Michael Bourlet described how the Germans defeated the French army who were positioned north. The Germans we able to encircle the French and their British allies, drove them back towards the coast and then headed south to Paris. When the Germans were behind the Maginot Line, they attacked it from the rear and captured the fortifications, taking over 500,000 prisoners.

As a result, the Maginot Line became a symbol of failed strategy and today, the term is a catchphrase used to describe a barrier than provides a false sense of security.