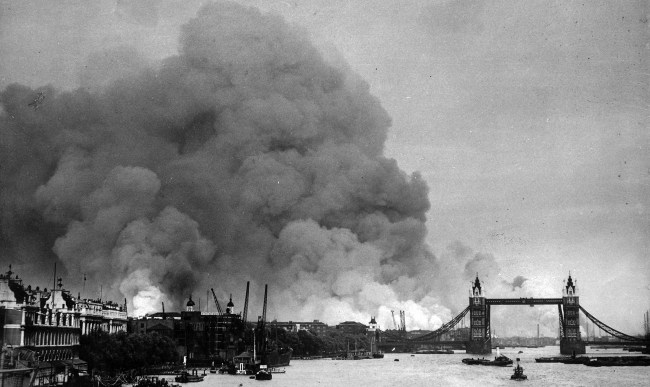 Home » The Blitz: The Bombing of Britain in WWII

The Blitz: The Bombing of Britain in WWII

The Blitz was an intense bombing campaign carried out by Nazi Germany against the United Kingdom during World War II. On September 7th, 1940, 300 German bombers attacked London, on the first of 57 consecutive nights of bombing. For eight months, the Luftwaffe dropped bombs on London and other cities across Britain in an attempt to destroy British infrastructure, cause immense destruction and lower morale. The attack, which got its name from the German word ‘blitzkrieg’ (lightning war), continued until May 11th, 1941.

Following the surrender of France in 1940, the Germans turned their sights towards their sole remaining enemy across the English Channel. Hitler desired a neutralized, submissive Britain so that he could carry out his plans for an invasion of the East without interruption. On July 16th, 1940, Hitler issued an order of the preparation and if necessary, execution of Operation Sea Lion, the plan of a sea and air invasion of the United Kingdom. However, with Germany failing to cripple Britain’s powerful Royal Navy, Operation Sea Lion was cancelled in exchange for new plan of attack to ultimately destroy British air power.

The Blitz began on what became to be known as “Black Saturday.” On 7th September 1940, the Luftwaffe launched its attack on London. For two hours, 617 fighters and 348 German bombers relentlessly dropped bombs over the city, particularly targeting the East End of London, before a second group of planes began another assault that lasted until 4.30 the next morning. On that day, 430 civilians were killed and 1,600 were critically injured.

Black Saturday marked the start of the campaign that lasted 57 consecutive nights. Between Black Saturday and 2nd December 1940, there was no 24-hour period without at least one bomb alarm (or alert as they became to be known as), and normally many more. On three different occasions, nine alerts were registered, and from the beginning of the Blitz until November 3rd, there were over 350 alerts. November 3rd and 28th were the only two nights during this period that were undisturbed by a siren or bomb.

City Life During the Blitz

The Air Raid Precautions (ARP) were in full action, and Londoners showed remarkable resilience while maintaining the business, work and efficiency of their city. Although operations were disrupted, in sometimes serious ways, no essential service was more than temporarily compromised. No major cuts were made in necessary social services, and private and public sites were speedily repaired, unless severely damaged. In most cases, minimal delays allowed daily life in the city to continue.

The raids largely targeted the Docklands area in the East End. This industrial area was a specific military target for the Germans, and around 25,000 bombs were dropped there alone. The Docklands was also densely populated with thousands of working-class people who lived in poor housing conditions. Not only did the raids damage Britain’s war production, but also killed many civilians and left many people homeless. With too few bomb shelters particularly in this area, many people sought shelter in London’s tube stations. More than 150,000 people took shelter in London’s Tube stations each night. Over time, the various stations developed their own mini-governments.

The Expansion of the Blitz

In November 1940, the Blitz was expanded to other cities in Britain. Outside London, the most heavily bombed cities were Birmingham and Liverpool. Other targeted areas included Manchester, Coventry, Sheffield and Southampton. The attack on Coventry was particularly devastating and on November 14th,1940, almost the entire old city center was destroyed by German bombers, killing over 550 civilians. The Germans even coined a new verb, “to coventrate”, to describe the immense destruction. In early 1941, the Germans launched an additional series of attacks, this time targeting ports. Between February and May, bombs rained down on Bristol, Plymouth, Portsmouth, Newcastle upon Tyne, Hull, Swansea, Belfast and Clydeside.

The End of the Campaign

In London, the night raids continued into 1941 with particularly heavy attacks occurring on January 10th-11th, February 17th, March 19th and April 19th-20th, resulting in considerable death and devastation. After three weeks of peace, May 10th-11th saw the most intense raid of the Blitz. Over 500 German planes dropped more than 700 tons of bombs all over the city, resulting in the destruction of over 11,000 homes and the death of nearly 1,500 people. Much of the city was severely damaged including the House of Commons, the British Museum, Westminster Abbey and The Temple. Despite a number of lighter raids later in 1941, the large-scale attack on May 10th – 11th marked the end of the Blitz.