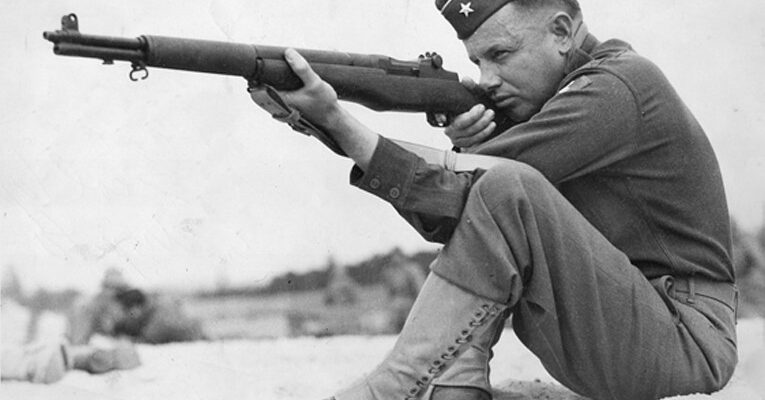 In contrast to World War I which was characterized by trench warfare and artillery barrages that lead very frequently to friendly casualties, World War II was characterized by significant advances in weaponry and modes of warfare. World War II exhibited more complex air combat, enormous naval fleets battling for control of the oceans and new large-scale artillery barrages that put those of World War I to shame. Here are some of the military weapons that lead to an Allied triumph over the Axis powers.

Nicknamed “the Flying Fortress”, the bomber manufactured by Boeing could fly at a top speed of 280 mph, carry close to 2000 kilos of explosives, and boasted nine machine guns. As the war progressed these specifications were increased to 5000 kilos of explosives and the addition of more .50 calibre machine guns capable of an astounding amount of destruction. The B-17 was a crucial tool in giving the allies the edge in the sky. Throughout the war it is estimated that 640,000 tons of bombs were dropped on German territories.

While the Nazis were well known to have a huge advantage with their powerful Panzer IV tanks, the M4 Sherman Tank advantage was given by the fact that America had the ability to manufacture them at a rapid pace. Close to 50,000 tanks were manufactured between the years 1942 and 1946. While they were not indestructible, the number of tanks the American forces could deploy allowed the allies to make their way through enemy territory. The Sherman Tanks were equipped with a turret gun, machine guns and were manned by a crew of 5 men. Some tanks could even be modified to allow them to float to shore as was done during the Normandy landings.

General George S. Patton, Commander of the Seventh United States Army during World War II described this weapon as “the greatest battle implement ever devised”. The Garand was the first standard issue self-loading rifle and was used by every military branch in the World War II theater. The rifle was semi-automatic and could fire eight rounds without needing to reload, saving the troops using it time that could give them the edge on the battlefield and more importantly save their lives. The M1’s success in World War II meant that it also saw use also in the Korean and Vietnam wars.

Used mainly by the American Forces, the grenade which was nicknamed the “pineapple grenade” saw widespread use in World War II. The grenade was both simple to use and caused much damage. The casing around the explosive was designed to break into hundreds of pieces of hot shrapnel upon explosion, putting in lethal danger anyone within a 10-meter radius and seriously injuring anyone within a 15 meter radius. Due to its lengthy fuse time of approximately 4.8 seconds soldiers had the option of either throwing the grenade immediately or holding the pin down for a second to reduce the chances of enemy’s throwing the grenade back.

This gun was notorious in its use amongst the trenches during World War I but even more so in the 20s and 30s due to it being a popular weapon amongst gangsters during Prohibition times, which is why it was nicknamed the “Tommy Gun”. This powerful and lightweight submachine gun had a firing rate of 700 rpm and a 30-round capacity making it incredibly effective for the allies when trying to take enemy positions. The British and French forces also used this submachine gun as part of the Lend-Lease Act of 1941.

It would be difficult to discuss the advancements of weaponry in World War II without discussing what is still today the most powerful form of weaponry used in combat, the atomic bomb. Two atomic bombs were employed by the United States against the Japanese in Hiroshima and Nagasaki in 1945. These bombs killed approximately 200,000 people and the sites of the bombings themselves would be plagued by radioactive exposure and long-term damage for decades. World War II was the first and last time that nuclear weapons were used in combat.

World War II exhibited the rising importance of weapons technology in the efforts to bring a decisive victory to any combat theater. The strategies and tactics became less about how to employ your soldiers and more about how to employ your weaponry through these soldiers. While the Nazis were also capable in the field of technological advancements, those of the allies proved to be more significant in in overcoming their adversaries.